Birmingham Fundraiser Success! On Saturday August 20, NationsUniversity held a fundraising dinner at the Holiday Inn Express in Hoover, Alabama outside of Birmingham. There were 97 guest in attendence to listen to Mac Lynn and others tell the story of NU and its mission. Dewayne Spivey opened the event with a prayer and NU Registrar, Mary Virginia Mabery, introduced the guests to the mission work conducted by the University.

Mary Virginia said, “I tell people NationsU is actually a fishes and loaves kind of operation. God takes our small offerings and turns it into unmeasurable treasure. Matt (her husband) and I both have our Master’s degrees in Christian Missions, have done mission work in various fields, and know a lot of misisonaries and NU is truly the most efficient use of missions money we have ever seen because it trains leaders where they are and breaks into many places most missionaries can’t.” 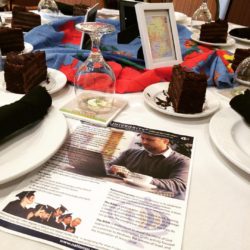 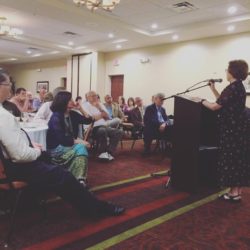 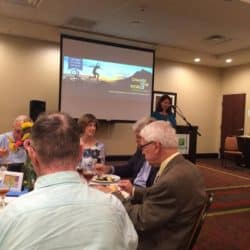 NU Director of Communications showed a video mash-up of student testimony and another video on how NationsUniversity started twenty years ago offering affordable, accessible, excellence in religious education.

Rick Sirmon introduced NU Chancellor Mac Lynn. Rick told the assembled guests, “What most excites me about NU and what it can do… Since its founding in 1995, NationsUniversity has served over 30,000 students in more than 145 countries, awarding bachelors and master’s degrees in religious studies. Students can choose the degree track or the non-degree track.”

Chancellor Mac Lynn shared how he was inspired by seeing God at work. He wanted the guests to envision the future of NationsUniversity and how it was reaching the lost around us, namely the refugees in Europe. As the diaspora from Muslim nations continues, NationsUniversity supporters around the world are using NU as a vehicle to share the Gospel with these refugees.

We are proud to announce that the Lord blessed the night and over $20,000 was raised to support the NationsUniversity mission. We want to extend a big thank you to the guests in Alabama that came out to hear about God’s work through NU and making the night a big success!

Learn more about how you can help NationsUniversity, The Mac Lynn Legacy