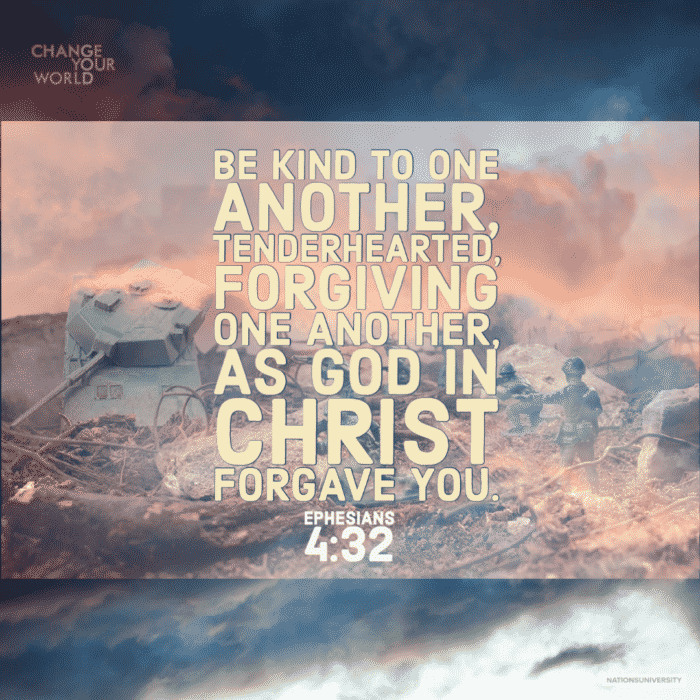 Forgiveness sometimes doesn’t come easy. Did you ever experience a childhood hurt that carried over into adulthood? A friend of mine recently shared that he enjoyed playing war games with armies of toy soldiers when he was a young boy. He would devise the battle plan, line the troops up, and pretend to do battle. While he was meticulously planning the war, the problem was that his sister would be waiting around the corner on her tricycle. Just as he completed the battlefield layout, she would roar around the corner and destroy his work.

One day he got so angry that he hit her. She went screaming to their mother, who then scolded the one who had been offended. Of course, they grew up and eventually became best friends. All was forgiven and forgotten. But what if he had carried that anger forward and, at age 50, still refused to talk to his sister? And what if she never said, “I’m sorry”? Perhaps reconciliation takes both a forgiver and an apologizer.

Forgiveness is defined as a conscious, deliberate decision to release feelings of resentment or vengeance toward a person or group who has harmed you, regardless of whether they actually deserve your forgiveness. Jesus taught in the most vivid way that we are to forgive whether the offender apologizes or not. Even on the cross, he prayed, “Father, forgive them for they know not what they do.” Paul wrote in Ephesians 2, “Be kind to one another, tenderhearted, forgiving one another, as God in Christ forgave you.” Yes, we need forgiveness as well, and we need to forgive. To the Colossians, Paul wrote, “…bearing with one another and, if one has a complaint against another, forgiving each other; as the Lord has forgiven you, so you also must forgive. (Colossians 3:13)

In our dealings with one another, we need to treat one another like God treats us. Paul wrote to the Ephesians, “…God, who is rich in mercy…out of his great love for us…made us alive together with Christ. “(Ephesians 2:4ff). There seem to be three levels of forgiveness and reconciliation that illustrate this. There is JUSTICE — we get what we deserve, like a speeding ticket when we exceed the speed limit. There is MERCY — we do not get what we deserve, like when the officer sends us on our way with a warning. And there is GRACE — we get what we do not deserve, like when the officer walks up and gives us a warm cup of coffee and a donut.

The New Testament teaches that God is a God of GRACE who gives us eternal life despite whether we deserve it or not. Perhaps there was a calling on my friend to extend grace to his little sister, whether she deserved it or not. If God is truly a God of grace, then we are called to be a people of grace. Typically, people will only go the second mile when they are compelled to go one.

Has anyone ever gone the second mile with you? How did that make you feel?