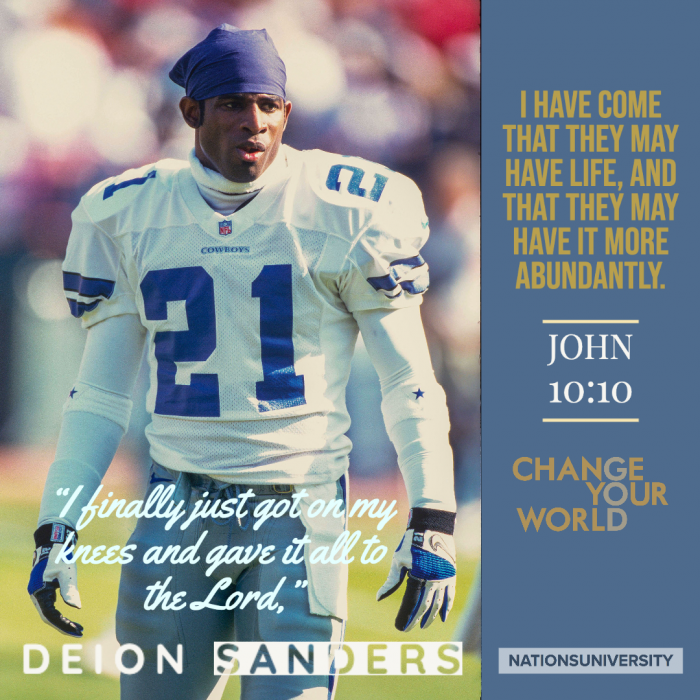 In today’s world secularists attempt to apply materialistic meaning to our lives. It would be convenient to imply a materialistic meaning to what Jesus is saying in the book of John, but that would be a grave mistake. In the Western world there are many folks who have an abundance of material possession. Yet, they are empty inside. “…for one’s life does not consist in the abundance of the things he possesses. (Luke 12:15).

Nevertheless, there is an emptiness that will continually gnaw at us until we come to Jesus. And still, try as we might, we fill our live with all sorts of things that feel satisfying at the time. What is more, when it is over they leave us emptier than before after the sweetness fades and the pleasure is gone.

Deion Sanders, nicknamed Prime Time and Neon Deion, had reached the pinnacle of athletic success in America. In college he was two times selected first team All-American. Professionally he played two sports, football and baseball. He had been a part of two Super Bowl Championship teams. He won a championship with the San Francisco Forty-niners and the their arch-rival the Dallas Cowboys. He also appeared in baseball’s championship, the World Series with the Atlanta Braves.

Moreover, during his 14-year NFL career, Sanders was a perennial All-Pro and one of the strongest pass defenders ever to play the game. All of professional football’s highest awards were achieved by him. By worldly standards he had achieved it all, earned all the success and the money that comes with it. Yet, in 1997 at the prime of it all, he drove his car off a cliff, ready to die.

Unabashedly, Sanders recounted the suicide attempt in his autobiography Power, Money & Sex: How Success Almost Ruined My Life. Amazingly, he survived that life ending attempt without any significant injuries. It was there that he decided his life was worth living.

“I finally just got on my knees and gave it all to the Lord,” Sanders said.

“Slowly, but surely, I had to deal with my faith, deal with my strength.” He continued to say, “I had to get a lot of Word in so that I could fight off the enemy. I wouldn’t be where I am today without my faith. People argue about what faith is, and who Jesus is, but it works for me. I’m not going to sit here and argue about who is what, and what is what, I’m just going to say it works for me.”

Consequently, materialism held no meaning for Deion. Only Jesus can fill this void in our lives, and he will fill you until your cup runs over.

What people call ‘in the ministry,’ I call it ‘in my will.’ I’m in God’s will, I don’t really get down with a lot of titles, this and that. I believe I’m just in God’s will. –Deion Sanders

Prayer: Lord when I feel empty fill me with Your goodness, help me keep my eyes on You. Lift me heavenward and teach me to walk in your steps.