An honorary doctorate of divinity was awarded to Randy Harris by NationsUniversity. The award was in recognition of exemplary service to fellow human beings around the world and scholarly excellence. Dr. Harris was presented the award at the 20th Anniversary Celebration dinner on April 16, 2016.

Dr. Harris was the guest speaker and the award was a complete surprise. He talked about the inspired imagination of those who started NationsU and how they could not see the explosion of Internet technology, yet they were in a position from the very beginning, because God knew what was about to happen. 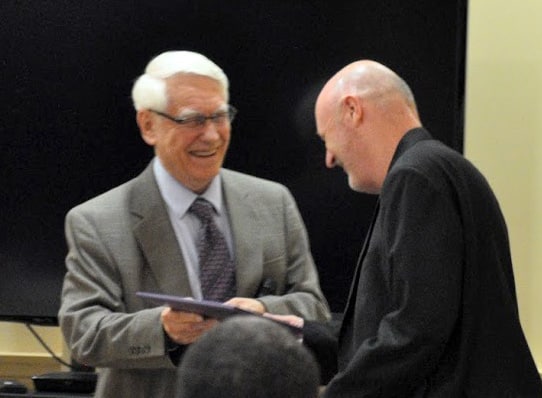 Known as an expert in modern theology and ethics, Harris holds degrees from Harding University, Harding School of Theology, and Syracuse University. Furthermore, he is the co-author of The Second Incarnation, coeditor and contributor to Theology Matters, and has written articles for Wineskins magazine.

Randy quips, “One of my favorite Christian authors, Sheldon Vanauken, a friend of C. S. Lewis, said years ago that when you get a new car you should also get a hammer. Take that hammer and go out and put the first dent in the brand new car yourself. Then you’re not afraid to use it anymore. That way you don’t have to park at the end of the parking lot to protect from door dings, because you’ve already put the first dent in it yourself. Vanauken’s point was this: things are not to be loved, they’re to be used. The corollary to that is this: people are not to be used, they’re to be loved.”

― Randy Harris, Living Jesus: Doing What Jesus Says in the Sermon on the Mount