Reflections – Anatomy of a Crisis 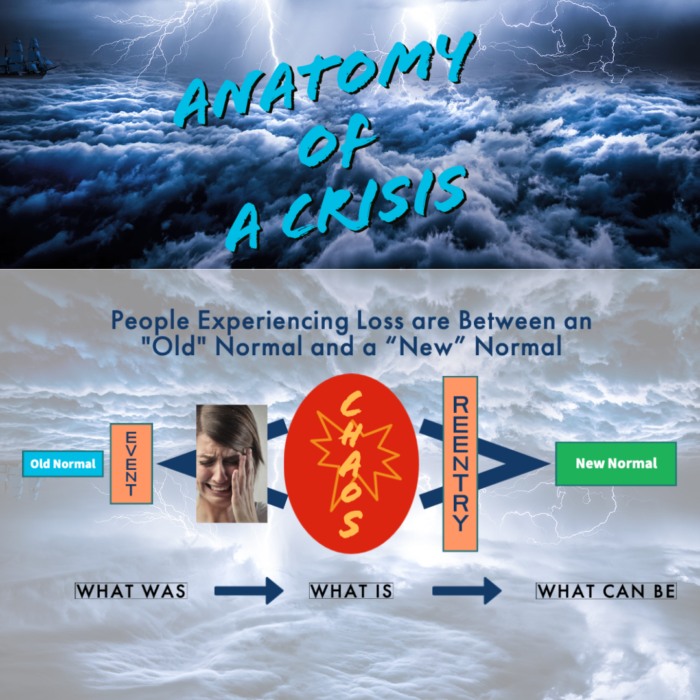 What is in the anatomy of a crisis? While crises come in all flavors, they share some common characteristics.  Typically, crises are sudden and unexpected; they are important to the one affected and produce significant consequences.  Usually, a crisis will also involve some form of loss.  Our lives are, quite simply, disrupted.  I suspect that you recognize these characteristics because each of us experiences crisis-like events during our lifetimes.

Another aspect of a crisis is that it proceeds through a definable process.  I coined this as going from an “old normal” to a “new normal.”  Between the two are the event itself, a period of chaos, and a period of reentry (See the diagram below).  From the middle of the process, the chaos stage, one can ponder what was, what is and what can or might be.  And at the end of the process, the individual comes out changed.  We are never the same, although the “new normal” can be quite good.  It is just different.  Does this ring true for you? 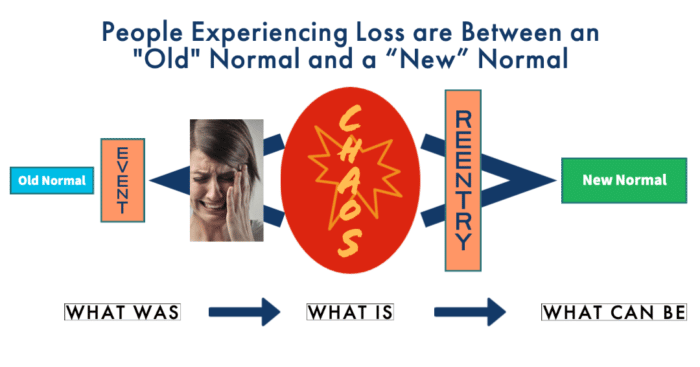 Think about what crises you have experienced; or one you are facing right now.  Physical injury or illness?  Floods?  Broken relationships?  Death of a loved one?  A really big promotion at work?  Terrorism or pandemic in your part of the world?  Spiritual conversion?  How have you dealt with such events?  How have others related to you as they tried to support you in the middle of your crisis?  How have you attempted to help others?  How did your faith play into the situation?

We are enjoying time with our grandchildren this weekend in the beautiful hill country just west of Austin, Texas.  I spent part of the afternoon with the three-year-old, jumping on a trampoline before dinner.  Then the fifth grader demonstrated her balance beam gymnastics skills before having a balance beam “pirate’s sword fight” with her third-grade brother.   The loser fell off the beam and into the “ocean.”  Family life just doesn’t get any better!

Even in such times of tranquility, I am aware that life’s next crisis could be just around the corner.  For example, I was recently called to a hospital emergency room where a young child had died after an automobile accident.  The parents had been preparing to transfer her to another hospital when she passed away.  Her death was unexpected, had significant consequences, was immensely important to the parents, and inflicted an immeasurable loss.  The entire family, as well as the hospital staff, was devastated by this very real crisis.  And they will never be the same.

How should we respond as we try to support others who are in the midst of such a crisis?  First of all, I would encourage us to realize that the ones affected cannot think clearly while in the “chaos” stage.  Their world has just been turned upside down.  As a result, this is not the time for rational advice or hardnosed sermonizing.  Most of all, they need the presence of caring fellow travelers who can stand by them while the initial shock and subsequent grief subside.

There will be a time to begin responding to the crisis, but it is not during the initial period of shock.  My primary role that night at the hospital was just to “be” with the family. Later, there would be time to reflect on the spiritual aspects, time to consult the Word of God more fully, and time to coach action steps.  You see, each stage of the crisis process requires its own form of ministry skills.

My first wife spent two years battling cancer before she eventually passed away.  The last visitor we had before she went to ICU, was intubated, and then died was a very well-known and highly educated minister.  Eighteen years later, I cannot remember one word of advice that he gave us.  I cannot even say that he had worded a very profound prayer at that time.

What I can say is that he was there.  That is what we remember.  And that was all that was needed.  Several months later, he dropped by the house, and we discussed some of the practical aspects of life that I was dealing with.  Then was the right time for a “coaching” spiritual discussion.

So, as each of us attempts to “stand by” others who are in the midst of their personal trial or crisis, let’s seek to use the correct ministry tool for the stage of crisis we have been brought into.  It will make all the difference.  As we experience our own crises, we can remain aware of which stage we are in at any particular point in the process.

Remember, God is there at each stage, and He wants nothing but good for each of us, even when we are screaming, “Why me?!!!”.  As one of my counselor friends likes to say, “…and you won’t always feel this way.”