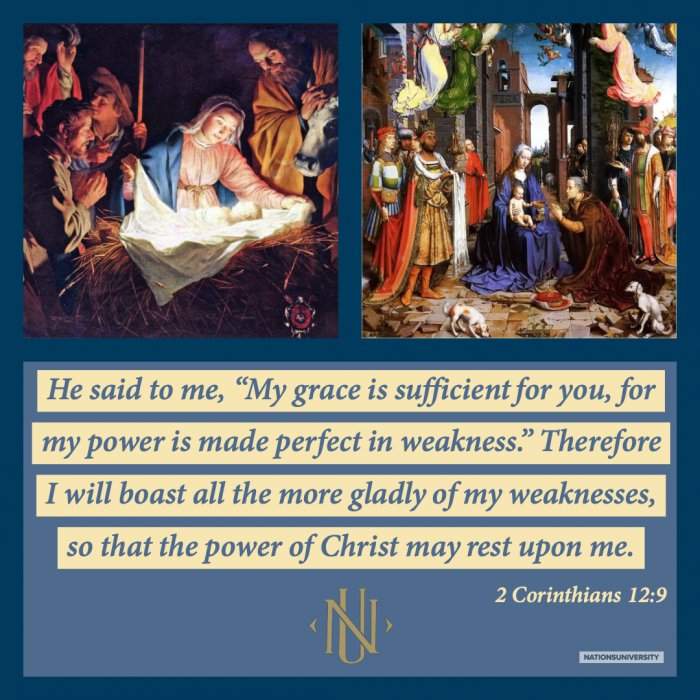 Christmas turns the world upside down: what does it mean for God’s power to be “made perfect in weakness?”

If you were wholly unfamiliar with the life of Jesus and listened only to what many Christians in America say today, you could be forgiven for thinking that the most important thing Christianity values is worldly power — the power to control and compel, to impose one’s will on others, to vanquish one’s enemies. Blessed are the politically powerful and the well connected, you might assume, for theirs is the kingdom of heaven.

The birth and life of Jesus shatter this narrative. Those of us of the Christian faith believe that Christmas Day represents the moment of God’s incarnation, when this broken world became his home. But it was not an entrance characterized by privilege, comfort, public celebration, or self-glorification; it was marked instead by lowliness, obscurity, humility, fragility.

The circumstances of Jesus’ birth “were calculated to establish his detachment from power and authority in human terms,” wrote Malcolm Muggeridge, a 20th-century British journalist who converted late in life to Christianity.

That could be said not just about Jesus’ birth but also his entire life, which was, in many respects, an inversion of what the world, including much of the Christian world, prizes.

“Christ was born in a manger to a family for whom there was no room,” Craig Barnes, the president of Princeton Theological Seminary, said. “He was raised by unremarkable parents in an unremarkable part of the world, conducted a ministry that was missed by most people, died as a criminal on a cross, and his ascension was seen only by a small band of disciples who then led a movement that within three centuries changed the world.”

The paradox is that Christianity changed the world despite Jesus’ declaration that his kingdom was not of this world. His disciples did not have notable worldly status or influence. Jesus’ energies and affections were primarily aimed toward social outcasts, the downtrodden and “unclean,” strangers and aliens, prostitutes, and the powerless. The people Jesus clashed with and who eventually crucified him were religious authorities and those who wielded political power. The humble will be exalted, Jesus said, and the last shall be first. True greatness is shown through serving others and sacrifice.

All of this calls to mind an account in II Corinthians, one I have been intrigued by for nearly as long as I have been a Christian. In his epistle, Paul is describing a “thorn in my flesh” that was tormenting him. (We don’t know specifically what it was.) Three times he beseeched the Lord to remove it, according to the apostle, to which Jesus replied, “My grace is sufficient for you, for my power is made perfect in weakness.” Paul went on to add, “For when I am weak, then I am strong.”

What does it mean for God’s power to be made perfect in weakness?

It’s a statement as much about us as it is about God. Most of us know that we often grow in times of weakness rather than strength when we face hardship rather than experience success. That isn’t always the case; sometimes, hardships and suffering simply overwhelm us, and no good thing comes from them.

Everyone has a breaking point.

But it’s also true that weakness can open the way for greater personal growth, reflection, and self-reflection, and focus us on what is essential rather than ephemeral. A counselor recently spoke of a former colleague of his who, because of chronic pain, was bedridden for two years. That pain she’s now largely free of. He described his former colleague as one the most cheerful and loving people he’s ever met. “She’s a better person” for having gone through her ordeal, he said. The point he was making isn’t that suffering is good, but that sometimes it can serve a purpose. This is true for people of different faiths and people of no faith.
But from a Christian standpoint, Craig Barnes said, “Our weakness finally opens our eyes to the need for a Savior. Nothing prevents that more than our strength. No one has ever said, ‘I was so successful I just had to come to Jesus.’”

“We can only love when we are softened,” according to Peggy Wehmeyer, a former religion correspondent for ABC. “We are most likely to be softened when we are weakened.” Ms. Wehmeyer, who wrote movingly about her husband’s suicide in these pages, told me that the aftermath of his death was “the most powerless I’ve ever felt. Trusting in God’s goodness and yielding without being able to nail him down. That’s where peace begins: Surrender, in powerlessness.”

It’s important to point out here that there are sufferings we may experience that make us a more resilient, deeper, and more compassionate person. Yet, if we were asked whether we are glad for having gone through it, we would answer no.

You can have scars and still be healed

James Forsyth, senior pastor of McLean Presbyterian Church in Virginia, was sexually abused as a teenager. “I wish this thing hadn’t have happened to me,” he says. But, he adds, “You can have scars and still be healed. There are some things in life you never move on from, but you do learn to carry them differently.”

Whatever their full effects, human weakness, and suffering are not meant to be ends in themselves. For Christians, they are meant to spur us to seek out God from a place of need and provide an opportunity for the display of divine power. And again: Power understood through the prism of Christianity is different from how the world generally understands power. Kerry Dearborn, professor emerita at Seattle Pacific University, described the difference between power over others and the power of connecting with others, which she said requires that there be openness and vulnerability.

As I understand the words of Jesus as recorded in II Corinthians, weakness opens us up to a fundamentally new definition of strength — strength that is not coercive, domineering, prideful, and self-seeking but rather compassionate, sacrificial, humble and empathetic. God’s power, perfected through our weakness, makes us an instrument of mercy, seekers of justice, agents of reconciliation. It helps us see the world in a different way.

Renée Notkin, a pastor at Union Church in Seattle, said: “I am daily inspired by how Jesus continually turns the world upside down in regards to power, might, worldly success and achievement. Jesus’ subversive challenges to the human-crafted structures that oppress and bind is what keeps one following Jesus and holding on to hope that there is a third way — the Jesus way that brings healing to individuals, communities and nations.”

Another pastor added, “Jesus was most frequently out among the people — engaging and paying attention to the realities of ordinary people’s lives and helping them see that in God’s eyes they are extraordinary — and so often these are the people who are viewed as weak in the world. One can learn how to live well from those who hold very little worldly power, but who are some of the most content and real people you will have ever met.”

This type of power often arrived at having traveled through what the Psalmist called “the valley of the shadow of death,” wasn’t simply Jesus spouting off abstract teachings; it was his life story. What the incarnation represents is God entering history not as the screenwriter of the drama but as an actor within it. Jesus is the suffering protagonist.

No one thought it would start quite this way, an infant placed in a manger in a troubled corner of a troubled world. You would have thought he would be among the most inconsequential individuals ever.

You would have been wrong.

Source: this Reflection has been very slightly edited from an article by Peter Wehmer, Contributing Opinion Writer, The New York Times as published on December 25, 2019.