Weekly Reflection – He Could Not Be Hidden 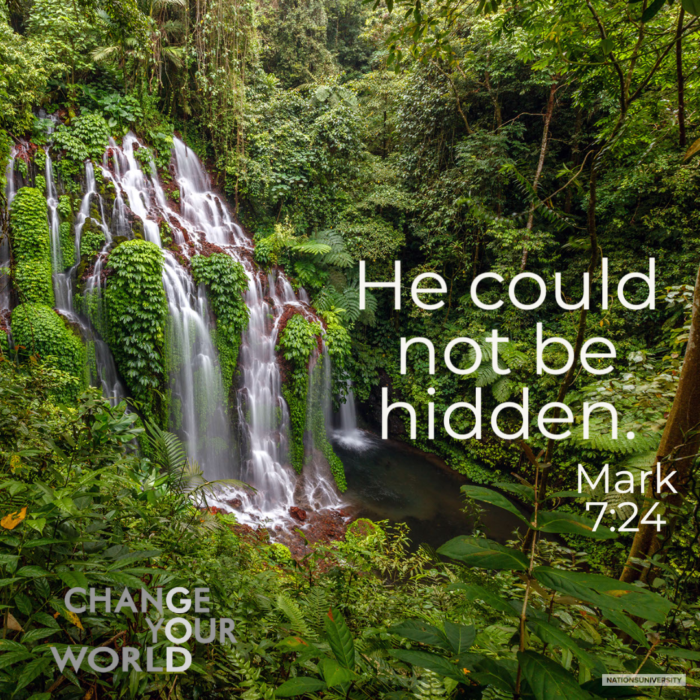 He Could Not Be Hidden was written by a long-time friend, Raymond Key, has provided this week’s Reflection. Mr. Key is 100 years old and still writing quality material. His offering seems particularly appropriate for this, the week of Easter.

It is said that men who excel cannot be hidden. The common view is that if a man builds a better mousetrap than anyone else, the world will make a beaten path to his door. Both of these statements are made in relation to the material side of man. There is something done that appeals to the imagination of man or something that he wants very much to make his existence more pleasant. So, he recognizes to some extent the source of that pleasure. These, however, depend upon the degree of excellence to which a man has attained, or the intensity of the need or want for that which a man possesses. Sometimes though, the uglier passions of man, or perhaps the lack of wisdom, combine to conceal things that are truly excellent from the world’s acclaim. As one poet wrote:

Full many a gem the dark unfathomed caves of ocean bare;
Full many a flower is born to blush unseen;
And waste its sweetness on the desert air.

It seems that the more spiritual things find it harder to receive recognition than the “mousetraps” of the world. Few people have ever been acknowledged as being truly great because of spiritual excellence and achievements. But perhaps it may be that their spiritual excellence was marred by some weakness or that the “achievement” was not the thing that people really needed but merely what the man thought that people needed. But when we read of the life of Christ, we find that strange statement in Mark 4:7 that “He could not be hid!”

The Son of God

Certainly, Christ never excelled in any “academic” field, never attended any great school, or studied under any great professor. The achievement of Christ was not in any field of science, for no invention or material discovery was ever credited to Him. During His lifetime on earth, He never traveled more than 200 miles from the place of His birth. His closest friends were among those who were considered ignorant and unlearned. He had no great possessions, for He Himself said, “The Son of Man hath no place to lay his head.” His active ministry lasted but a brief three-and-one-half years. At the end of that short period, he was executed as a common criminal – as a rebel against the standardized thinking and teaching of the Jews. Yet this man could not be forgotten. As a result of his life and teaching the whole civilized world has been transformed. There is only one satisfactory explanation: This man was the Son of God.

Christ could not be hidden even before He came to Bethlehem. That need was expressed in prophecy. Many heralds were sent before the approaching King to say, “Unto us a child is born; unto us a son is given….and he will be called Wonderful, Counselor, Mighty God, Everlasting Father, Prince of Peace….” (Isaiah 9:6-7). Some of these heralds walked so far in advance of the coming King that the time of which they spoke seemed extremely far away. Still, they heard the far-off footsteps, caught brief glimpses of the approaching glory. I do not know how distinctly they realized the type or nature of His Kingdom or how accurately they saw the exact form of His royal presence. “The prophets who spoke of the grace that was to come to you, searched intently and with the greatest care, trying to find out the time and circumstances to which the spirit of Christ in them was pointing……even angels log to look into those things.” (I Peter 1:10-11) But this we know – Christ could not be hidden even before He came in the flesh. His forerunners had made the world’s heart tremulous and expectant. As one looks for the rising of the sun at the end of a weary sleepless night, so did men look for Him!

At His coming to the Bethlehem manger, it was that way again: the world could not hide the coming Light! Taking the record just as it stands, it is nothing less than marvelous! The Emperor’s decree drives an expectant mother to a small village that was so crowded that she is forced to rest her weariness in a stable with animals. This King was not born in a palace, but He could not be HID. The manger was not like a throne, but He could not be concealed! The “swaddling” clothes were not like the royal purple, but they did not wrap Him in secrecy; His heavenly Father gave the name of His birthplace to a star and hung that star in the sky as a guiding light to some “wise men.” He took a song of Heaven and gave it to an angelic choir. He drew from the pastoral land of the shepherds, some keepers of the flocks to follow that guiding star to where a newborn Shepherd King of humanity was waiting. The Father drew that group of “wise” men, only to make them wiser as they searched for the newborn King who, in His brief time on earth would change the hearts and lives of humanity.

Yet all of this is in spite of the fact that the place and manner of His birth seems like a drama of concealment. Could the world ever find Him there, among the lowly barnyard beasts, lying upon the hay, covered by very coarse clothes: sleeping upon the breast of a very poor and humble mother? Could it hear the voice of a newborn baby amid the confusion of moving caravans and the boisterous shouts of pilgrims? The “wise men” and the shepherds did hear. They did search and they did find Him. Bethlehem and a stable might seem a good hiding place, but they could not hide the Christ.

After Bethlehem, and even after the savage butchery by a desperate Herod, He could not be hidden. A multitude of wee children, in unmarked graves, were called by the historian, Prudentius, the “Blossoms of martyrdom.” But there was one baby that could not be placed in an unmarked grave. Some kind of angel was sent, and led the way into the land of Egypt, and protected Him there. Out of all kinds of dangers, rivers, deserts, armies, God protected Him, finally leading His family to a town despised by the general public. This disrespect was shown by the proverb of contempt: “Can any good thing come out of Nazareth?” Other Herods would not look for Him there. But even a town held in contempt, a poor cottage, an insignificant workman’s shop, rough workman’s clothing – did not finally hide Him from the world’s view. A final Herald came, a man who had one work to do, one message to proclaim, crying out, “There comes One after me,” and “The kingdom of heaven is at hand!” “Prepare ye the way of the Lord!” And Jesus came forth from Nazareth to begin His short span of public teaching, something the world so deeply needed and to offer them the life they so deeply longed for! And He could not be hidden.