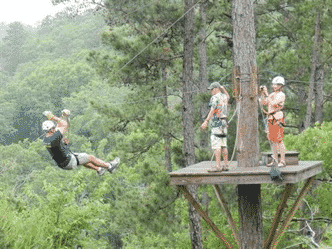 Humans have always had an innate fear of a snake.
In the Bible snakes have served as a symbol of the “evil one” or the “deceiver.”  In Genesis 3 we read the story of Adam and Eve and their encounter with the lying serpent.  Proverbs 23:32 speaks of wine going down smoothly but in the end biting like a snake.  In Numbers 21 God sent venomous snakes among the people when they grew impatient and spoke against God and Moses.

When the people cried out, God had Moses attach a bronze snake on a pole so that anyone who looked at it could be healed from the bite of these snakes.  The New Testament suggests we look at Christ on the cross as an analogy to this.  Nowhere in the Bible do I read of a “friendly” snake!  As some of my friends say, “The only good snake is a dead snake!”

This past week I took two of my school age grand children “zip-lining” in the woods of East Texas.  A zip-line consists of a pulley suspended on a cable, mounted on a slope. It is designed to enable a user to be propelled by gravity and travel (or “zip”) from the top to the bottom of the cable by holding on to the freely moving pulley. At our location there were eight lines ranging from under 100 meters in length to over 600 meters. Some traveled over open meadows.  Others glided over pine forests.  Still others were suspended over water.  Zipping along them was great fun…most of the time…until we encountered the snake!

One of the shorter cables went over a pond.  The ten of us first climbed a high tower to access the cable.  The idea was to then “zip” across the pond to the opposite shore.  The grand children were “eager beavers” and jumped at the chance to be the first to go.  I was third and was half way down the cable when I heard loud, hysterical screams coming from the platform behind me.  I swung my body around just in time to see a large splash as something hit the water.

Here is what had happened.  At the “jumping off point” there was a box that one stood on for the attendant to attach you to the cable.  However, one of the group was quite tall.  The attendant decided to move the box for this man so he wouldn’t have to stand on it.  And guess what. 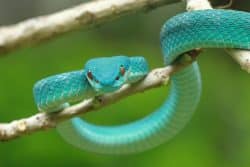 Yep, there was 1.5 meter snake under it!  And the remaining people on the platform were tethered by cables and could not run, jump or otherwise flee.  All they could to is stand there and panic and scream, especially three young girls.  In the end their father became the hero as he reached down, grabbed the snake by the tail and threw it into the lake.  That was the “splash” I saw.

I have continued to reflect this week on three points.  First of all the three young girls will never forget the day they came face to face with a snake.  Second, they will never forget their father’s courage as he “saved them” by throwing the snake off the platform.  Third, children are ALWAYS watching their parents and will ALWAYS remember how they behave, be it good or bad.  So we parents need to pay attention to our behavior!  Will we be remembered as our child’s hero?

There is a deeper dimension to this.  Each of us has “snakes” within us that hinder our ability to live effectively, to live the way we were created to.  Yes, that old serpent of Genesis 3 is still around!  Perhaps we need to be reminded of and figuratively look to Christ on the cross as our divine healing from these snakes.  We can remember that our heavenly Father is our hero and will always be there to throw the snake out of our lives (or at least protect us from its venom) when we look to his Son for protection.

Finally, a practical question.  What are the snakes in your life?  Are you even aware of them as they lie quietly under the box…waiting for an opportune moment?  How are you reacting?  Are you blissfully unaware of their presence?  Are you frozen in fright?  Are you feeling the venomous effect of the bite?  Are you looking to Jesus to be your courageous hero?  Do you remember all the times in your life that Jesus and the Spirit of God have saved you from the terror of other “snakes” that suddenly emerged from the most unexpected places?

I am thankful for the One who has saved us and will continue to do so.  Let us look to him this week!

You don’t have to make the journey alone, write to the Chaplain at anytime.