YOU WILL RISE UP AGAIN 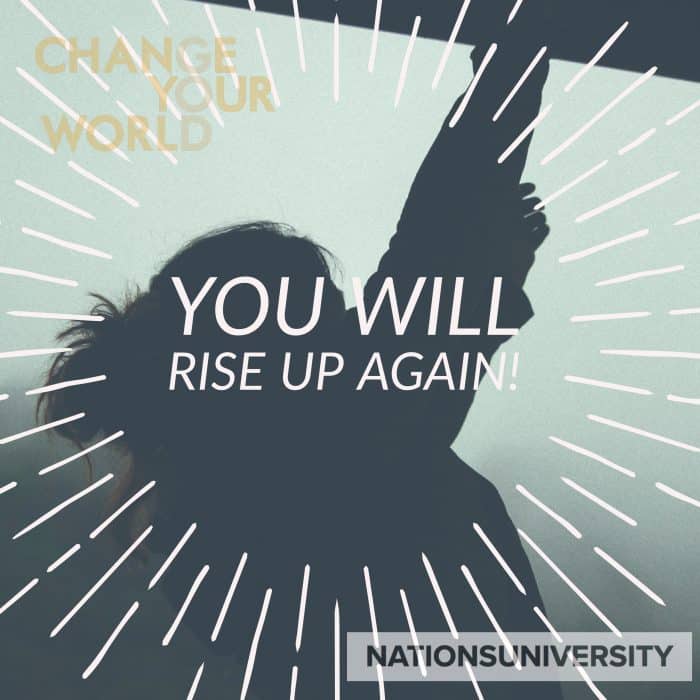 Though it may not seem like it, you will rise up again. Many are the times when a fervent believer of Jesus Christ is subjected to trials, suffering, and tribulations. Life itself it’s a test, and therefore, a Christian test can be of different forms. This may include economic hardships, chronic illness, termination of a job, closure of a promising business, sickness, broken relationships, divorce, rejection by your parents/children, debts, war, ethnic hatred, racial discrimination, and many others.

The test varies depending on an intimate personal relationship with God. Perhaps to say that each person is a unique entity in the presence of God, and hence, our understanding and level of trust in God is also different. Jesus calls us to a life of faith that endures all kinds’ of difficulties including and overcoming death just as He did on the cross. Could you please pause for a moment and think about your level of trust in God. Would you like to mature in faith and develop a more intimate relationship with God? I’m sure you would say yes. Faith comes through hearing the word of God and doing as the Scripture commands.

The Bible talks about Job as a man of faith due to his unwavering endurance and commitment to trust in God. Job had a great family, and he was well known as a wealthy man. In his possession were the servants, oxen, camel, sheep, and asses. His life turned upside down when his sons and daughters, servants, and sheep were killed. His sheep, oxen, and asses were taken away. His body was “afflicted with loathsome sores from the sole of his foot to the crown of his head,” Job 2:7. His wife challenged him to “curse God and die.” Job 2:9. His friends despised him too.

In reality, Job’s family, wealth, health, and fame were no more. His life condition was unbearable before human eyes. Even the wise men who understood the times they didn’t know the main reason why such a tragedy had to occur to him. However, Job’s conscience was very active and alive. Deep in his mind and heart, he knew that his situation was not permanent and that he will rise up again. Above all, he recognized God as His sole creator and redeemer.

What might be your reactions today if your family, wealth, health, and fame are taken away from you? Would you still trust in God again? Well equipped army officers have to endure the war even if it’s so tense until their commander declares that they have acquired the victory. Likewise, Christians’ soldiers are required to endure all the trials, suffering, and tribulations as they walk in the footsteps of Jesus Christ as their commander.

Like Job, Christians must possess the faith and hope to believe that no matter the downfall in life, they will rise up again. Job 14:7 reminds us “there is hope for a tree if it is cut down, that it will sprout again, and that its shoots will not cease. Though its root grows old in the earth, and its stump dies in the ground, yet at the scent of water, it will bud and put forth branches like a young plant.” Surely, there is a God in heaven who makes the stumps to sprout again.