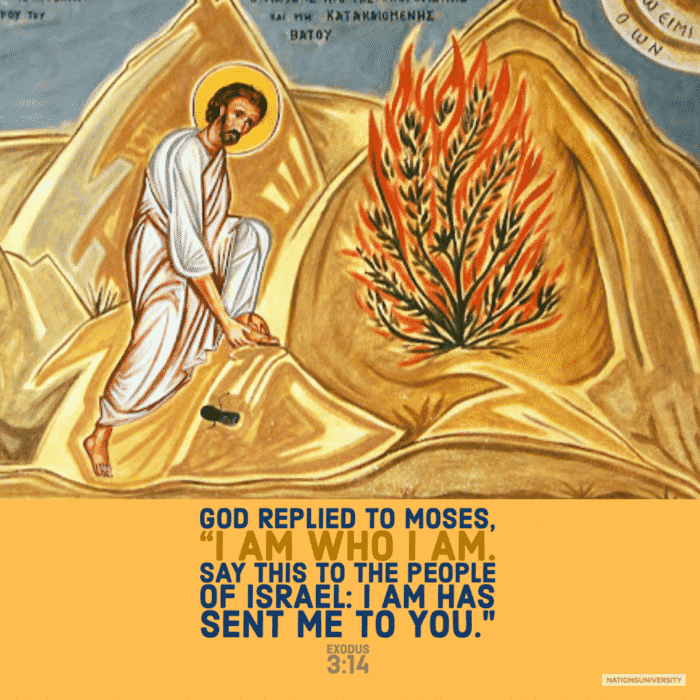 God’s sovereignty, what does he mean by God of gods if there is only one God? He means exactly that in Deuteronomy (10:17). The special covenant name of God in biblical Hebrew is Yahweh. In English translations, it is spelled LORD, but typically with smaller capitalizations. It can mean “He is” or “I am” depending on who is doing the speaking (Exodus 3:14).

So, what is in a name? When God speaks His name, the Hebrew word He uses is Hayeh — “to be.” That is the word He uses when talking to Moses at the burning bush. Basically, God uses a verb to express His name. Translated into English, God is telling Moses, “I AM that I AM” (I AM That I Am = LORD). God is talking to Moses in the first person.

The Israelites refer to God in the third person, i.e., Yahweh — “He is.” The writer of Exodus is using very deliberate language. The name of God Hayah is a deliberately first-person singular form of the verb “to be.” It is a statement of self-existence. It implies that God is not bound by time and is independent of all creation. Furthermore, this statement is a denial of any being created by any higher power or force. It is a clear indication that His name means he is the God of the past, the now, and the future (see notes in the NET Bible).

So how did we get to God of gods? What does God mean by this? The key to understanding this is in the Hebrew language. Yahweh was an elohim, but no other elohim was Yahweh. The noun elohim is a Hebrew word for any inhabitant of the spiritual world. They cannot be seen by those in the material world. Hence, they are invisible to us. The elohim includes God, the heavenly host, angels, demons, and the human dead. The Israelites also knew that the gods of other nations were real. Their God was unique, one-of-a-kind, like no other, and stood apart and above those other gods (Ps.82). God clarifies this when He says He is called, “I am.”

God told Moses at the burning bush that He is unique, incomparable, and all-powerful. This notion is seeded throughout the Bible. He is the creator of the heavenly host according to Ps. 148:1-5 (notice verse 2). Are we to derive from scripture that God has authority over spiritual beings who do not exist? He told Moses on the way to Egypt that he was El-Shaddai to Abraham, Isaac, and Jacob (Ex. 6:3). God will confront these spiritual beings, the commander of the powers in the unseen world (Eph. 2:2) through Moses and Aaron in Egypt. He is going to reveal Himself as the great “I AM” before Pharoah and the world.

If we are to believe Psalm 82, that “God has taken his place in the divine council; in the midst of the gods he holds judgment,” then it must be true that there are lesser gods. These gods ruled unjustly and led us away from worshipping the one true God.

To say that God is Lord over mythical beings only mocks God. For God truly is the God of gods, He means exactly what he says. We must respect God’s sovereignty.

The views and opinions expressed in the NationsUniversity Blogs are those of the authors and do not necessarily reflect the official policy or position of NationsUniversity. Any content provided by our bloggers or authors are of their opinion and are not intended to malign any religion, ethnic group, club, organization, company, individual or anyone or anything.