Weekly Reflection – The Center of Our Lives 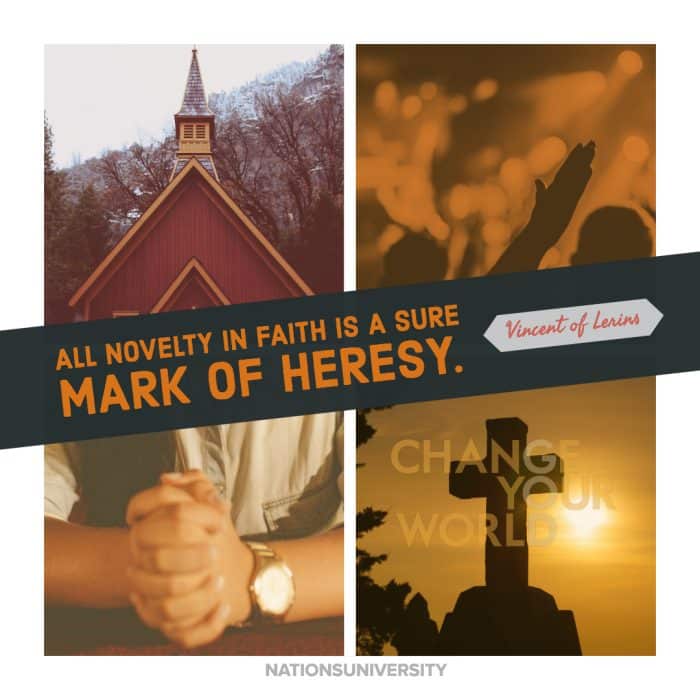 The Center of Our Lives: this week we have two trains of thought, one regarding a life centered in Christ and a second on the general subject of the development of religion.

“When Christ is the center of our lives, unambiguously and without competition, the rest of our lives tend to fall into harmony around that center.  What this is about is bringing us back to this harmonizing unity.  Let your life [and religion?] be as complex as you want, but all of this gathers harmonically.  Stop directing your life ego-dramatically and start thinking about it theo-dramatically!  Your life is not about you.  It is about your participation in this great divine adventure.”

The Development of Religion

As I understand it the first several centuries of the Christian faith were marked by considerable confusion vis-à-vis the practice and doctrine that was to be followed and considered to be divinely endorsed.  A number of off-key belief systems arose.  These are now know as “heresies” and have been described by at least one writer as “that which preserved the appearance of Christianity, and yet contradicted its essence.”

The Apostle Peter wrote about this as early as II Peter 2:1, “But there were also false prophets among the people, just as there will be false teachers among you.  They will secretly introduce destructive heresies, even denying the sovereign Lord who bought them…”

There became a serious need  in the early centuries to clarify what would be followed as “true doctrine.”  This need appears to have been met in three ways.  First, a brief statement of faith (creed) that everyone could memorize was set (Note that the vast majority of the population was illiterate at this time).  Although there were several competing draft creeds, the “winning version” at least for Western Christianity is known as the Nicene Creed of 325 AD.

Secondly, the official “canon” of scripture was eventually locked in somewhere during the fourth century.  This served to identify and exclude those writings that were considered to be outside the orthodox faith.

Finally, an organization evolved that was founded on the concept of “apostolic succession”wherein the church was to be led by individuals who traced their authority directly back to the original Apostles.  A rudimentary hierarchy consisting of bishop, presbyters and deacons was in place by the second century.  This “three legged stool”of creed, canon, and authority succeeded in codifying the early Christian faith in a confusing market place of theological views.

I recently came across the following tome by Vincent of Lerins in which the author considers the development of the church over time.  It is significant to me that this was written in the early fifth century, perhaps shortly after the Biblical canon was generally accepted.

“Is there to be no development of religion in the Church of Christ?  Certainly, there is to be development and on the largest scale.

“Who can be so grudging to men, so full of hate for God, as to try to prevent it?  But it must truly be development of the faith, not alteration of the faith.  Development means that each thing expands to be itself, while alteration means that a thing is changed from one thing into another.

“The understanding, knowledge and wisdom of one and all, of individuals as well as of the whole Church, ought then to make great and vigorous progress with the passing of the ages and the centuries, but only along its own line of development, that is, with the same doctrine, the same meaning and the same import.

“The religion of souls should follow the law of development of bodies.  Though bodies develop and unfold their component parts with the passing of the years, they always remain what they were.  There is a great difference between the flower of childhood and the maturity of age, but those who become old are the very same people who were once young.  Though the condition and appearance of one and the same individual may change, it is one and the same nature, one and the same person.

“The tiny members of unweaned children and the grown members of young men are still the same members.  Men have the same number of limbs as children.  Whatever develops at a later age was already present in seminal form; there is nothing new in old age that was not already latent in childhood.

“There is no doubt, then, that the legitimate and correct rule of development, the established and wonderful order of growth, is this: in older people the fullness of years always brings to completion those members and forms that the wisdom of the Creator fashioned before hand in their earlier years.

“If, however, the human form were to turn into some shape that did not belong to its own nature, or even if something were added to the sum of its members or subtracted from it, the whole body would necessarily perish or become grotesque or at least be enfeebled.  In the same way, the doctrine of the Christian religion should properly follow these laws of development, that is, by becoming firmer over the years, more exalted in the course of time, more exalted as it advances in age.

“In ancient times our ancestors sowed the good seed in the harvest field of the Church.  It would be very wrong and unfitting if we, their descendants, were to reap, not the genuine wheat of truth but the intrusive growth of error.

“On the contrary, what is right and fitting is this: there should be no inconsistency between the first and last, but we should reap true doctrine from the growth of true teaching, so that when, in the course of time, those first sowings yield an increase it may flourish and be tended in our day also.”

(Excerpted from the first instruction by Vincent of Lerins, cir. 434 AD)

It seems to me that we could use the views of Vincent of Lerins to check on our practice of the Christian faith today, some 17 or so centuries after he wrote it.  In what ways is our practice of Christianity consistent with the original form from which it has grown?  Might there be a few limbs and leaves that need to be pruned?  I am reminded of a book written some thirty years ago by Dr. Bill Love.  He called for a return to and emphasis on “the core gospel.”  Food for thought!