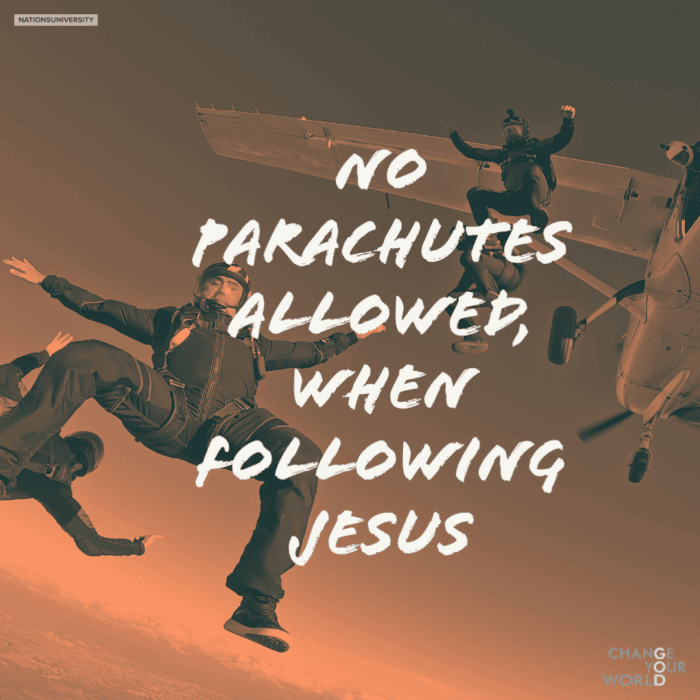 There are no parachutes allowed when following Jesus. Who is my master? Since it is impossible to serve two masters, my life needs either to submit to God or to consciously reject divine control and aim at some specious “autonomy.” Either I look for self-transcendence based on faith, or I lock myself within my narrow world of experience, memory, and perception.

There is no possibility of sitting on the fence for more than a brief interval. A choice has to be made that involves the elimination of one option. The kind of commitment called for by our Christian profession does not permit the wearing of a parachute.

Positive attachment to Christ necessitates a corresponding detachment from those forces which hold us to bondage.

Do you not know that when you present yourselves to someone as slaves for
obedience, you are the slaves of the one whom you obey? Whether it be sin,
resulting in death or obedience, resulting in righteousness. Thanks be to God,
though you used to be slaves of sin you became obedient from the heart to that
form of teaching to which you were committed. Once you were freed from sin
you have than become slaves of righteousness.

For Paul, freedom seems to consist less in self-determination than in submission to that power that is objectively higher, more powerful, and more beneficent. In such a context the notion of ‘freedom’ to commit sin becomes an absurdity. All wrongdoing is enslavement; the only way to be free is to distance ourselves from sin.”

Source: This Reflection is taken from (slightly modified) Living The Truth = Saint Benedict’s Teaching on Humility, by Michael Casey, Liguori/Triumph, 2001