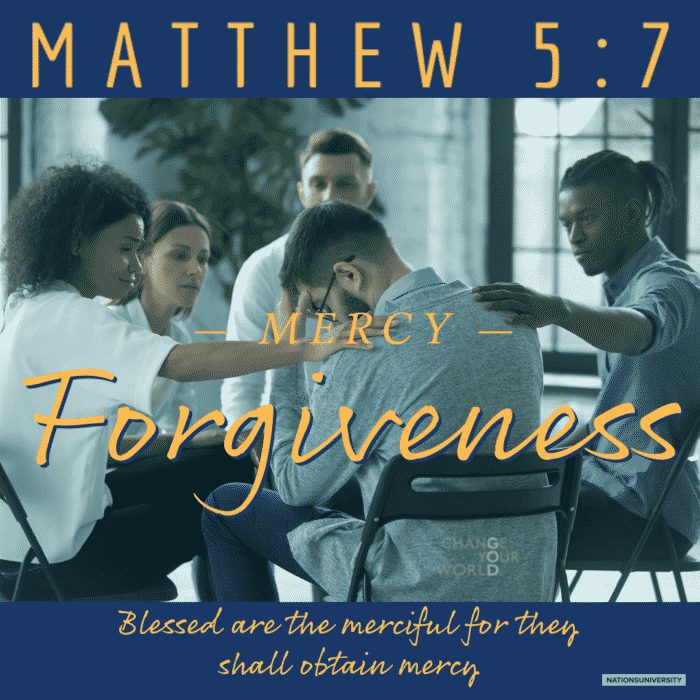 Forgiveness is an important part of a Christian’s life, and I have been considering this all week. It turned out to be a bigger topic than I had previously appreciated. It seems closely associated with and intertwined with the concepts of reconciliation and love. All three are essential to one’s peace, joy, and a fulfilled life. Unforgiveness lurks within us like the bottom 90% of an iceberg, and you know what an iceberg did to the Titanic.

It has been said that living like Jesus must include forgiving like Jesus. And it is difficult, hard emotional work. It’s not easy to forgive someone who has hurt your feelings or harmed you physically. Have you experienced this? Do you know firsthand what I am writing about? As Christians, we clearly enjoy God’s forgiveness, but we often have difficulty forgiving others until the offender has suffered appropriately for the harm she or he has done to us. Have you ever wanted your “pound of flesh”?

Mark Abshier has defined forgiveness in this way: “Forgiveness is clearing the heart of reasons to not show mercy to another.” As forgiving Christians, we must forgo our desire for that “pound of flesh” and choose mercy instead. But it is hard. What could be more difficult when we have been taken advantage of or cheated or slandered or swindled or gossiped about or physically harmed?

Forgiving Does Not Mean Forgetting

Forgiving does not mean forgetting. Healing from a hurt inflicted by another can eventually come, but that does not mean we have forgotten the hurt or that scars do not remain. Until that healing has occurred, we often feel a need to blame the other. In fact, sometimes holding a grudge is a cover for low self-esteem. I can only feel better about myself when I can blame you or other people for where I now find myself. A lot of this is based in what psychologists call the ego. Left unattended, it eats on the subconscious mind like an invisible cancer. And, like cancer, it will kill you!

Forgiveness is not synonymous with reconciliation, but it is a means to reconciliation. There is something special about a Christ-like love that is expressed in forgiveness. In fact, it has been said that forgiveness is literally a matter of heaven or hell. It affects our relationship with God now and into eternity. In Matthew 18, Jesus teaches Peter that he must forgive “70 times 7”.

Beginning there, Jesus tells the parable of the unmerciful servant. It ends with, “This is how my heavenly Father will treat each of you unless you forgive your brother or sister from your heart” (Matthew 18:32-35). And of course, the Lord’s Prayer includes the plea that we might be forgiven “…as we forgive those who trespass against us.” Jesus taught in the sermon on the mount, “Blessed are the merciful for they shall obtain mercy” (Matthew 5:7). In other words, forgiveness is something we have to do all of our life. It becomes a lifestyle. As children of God and followers of Jesus, forgiveness must be taken seriously. And when we do, the result is a sense of being blessed.

By the way, have you ever hurt someone? Have you felt the need to be forgiven? You see, this forgiveness thing is a two-way street. It is grounded in relationships that forgive and encourage, and care for one another rather than treating one another with the proverbial wrecking ball. Which approach would you prefer to have if you are on the “receiving end”?

We must likewise choose to wish good on the one who has hurt us. We love because God first loved us. And then, one has to let the issue go. The scar will remain, but it will no longer negatively affect the way we live with and relate to the other. And that’s how we will know that healing has done its work.

Forgiveness is hard work. But it is one of the things that go hand in hand with loving people like Jesus loved people.

It seems to me that there is a continuum that goes something like this:

All of this began with a loving God, resulted in forgiveness that produced reconciliation, and can end in joy, power, and other aspects of the life we really wanted and were created for. Now that’s something worth pursuing! Begin today.

A Reading About Forgiveness, from a sermon by Caesarius of Arles[1]

(Caesarius of Aries was the foremost churchman of his generation in a portion of Gaul.  He lived a thousand years before the Protestant Reformation (469-582 AD) and was particularly known for his preaching, generally on moral issues. He focuses on forgiveness in the article below.)

If any one of us is in conflict with another, let us end the quarrel lest we ourselves end badly.  Do not consider this unimportant, my beloved.  Let us call to mind that our life here is mortal and frail, that it is endangered by many and great temptations, and this makes us pray that we may not be overcome. And so, we realize that even the just are not without some sins.  But there is one remedy which enables us to keep alive.  For God, our Master, told us to say in our prayers: “Forgive us the wrong we have done as we forgive those who wrong us.” We have made a contract with God and taken a resolution that the wrong must be forgiven.  This makes us ask with complete confidence to be forgiven provided we too forgive.

If, on the contrary, we do not forgive, how can we in good conscience hope that our sins will be forgiven?  Let us not deceive ourselves:  God deceived no one.  It is human to be angry, but I wish it were impossible.  It is human to become angry but let us not water the small plant born of anger with various suspicions.  Let us not permit it to develop into a tree of hatred.  It happens also frequently that a father is angry with his son, but he does not hate the son.  He is angry because he wishes to correct the son.  If this is his purpose, his anger is animated by love.

We read in Scripture: “Why look at the speck in your brother’s eye when you miss the plank in your own?” You find fault with another person for being angry, and you keep hatred in yourself.  Anger in comparison with hatred is only a speck, but if the speck is fostered, it becomes a plank.  If, on the contrary, you pluck out the speck and cast it away, it will amount to nothing.

You hate your brothers and sisters and walk safely around and refuse to be reconciled with them, and God has given you time and opportunity.  Yet you are a murderer and are still alive.  If you felt God’s wrath you would be suddenly snatched away with your hatred toward others.  God spares you; spare others likewise; make up and seek reconciliation with them.

But suppose you want reconciliation and another does not want it.  That is enough for you; you have something to grieve for, you have freed yourself.  If you want agreement and the other refuses, say confidently: “Forgive us the wrong we have done as we forgive those who wrong us.”

Source: Much of this Reflection has been inspired by and developed with thanks from a sermon by Mark Abshier on March 7 at the MacArthur Park Church of Christ in San Antonio, Texas.