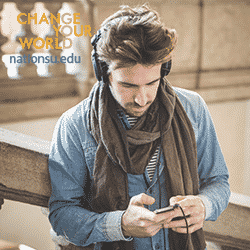 I am listening to Hebrews these days. Each morning I’ve been listening to an audio recording of the letter to the Hebrews, usually while shaving and doing my ‘morning routine.’  After a month of this, the text is rolling around in my head like a song that won’t go away!  That’s a good thing, and it is helping me prepare to teach a class beginning next week at my local church.

I’ve also been giving some thought to the question, “What has God been up to?”  What has he done in the past?  What is he doing now?  What does the future hold?  During this first week of a new year, most of us will make some form of resolutions for 2018, i.e., lose weight, study the Bible more, work harder, etc.  Is God involved as we contemplate these intentions?  The Hebrew writer suggests that he probably is.

You see, the epistle to the Hebrews speaks directly to that point.  The writer proclaims that God spoke in the past (1:1) through various agents, but at the time of writing, he had spoken directly through his Son, Jesus Christ (1:2).  And then God continues to be active around the world, even some 2,000 years later (13:29) in the 21st century.

The point of the epistle seems to be to encourage Jewish Christians (probably in Rome) not to give up in the midst of their difficulties and impending persecution, to hold fast to the teachings they have received, and to look forward to God’s continuing participation in their lives.  Most of these Christians were not members of the Roman elite. Instead, I understand they were more akin to what we might today call the “street people.” And the writer is attempting to encourage them to hold fast to the teaching they have received.

I know that a significant number of students at NationsUniversity (especially those in ‘third world countries’ or prisons) are living under challenging circumstances.  Some struggle to provide housing and food for their families.  Others are persecuted by the authorities and even their neighbors in countries that are not friendly to Christianity.  Still others (perhaps most of us) simply struggle with temptation and the urgings of the flesh.  Life for many is exceedingly difficult.

The epistle to the Hebrews may have an important message for each of us who struggles in today’s world.  Don’t give up!  Stay faithful to the teachings you have received!  God is as active today as he was in the past.  He will not let you down!

May 2018 be a year in which we see God’s dominant presence in our lives and the lives of those around us.  In the end, all will be well for we have a great high priest (8:1) sitting at the right hand of God the Father. Hallelujah!

Read more reflections, The Center of Our Lives