Weekly Reflection – On a Week in Europe 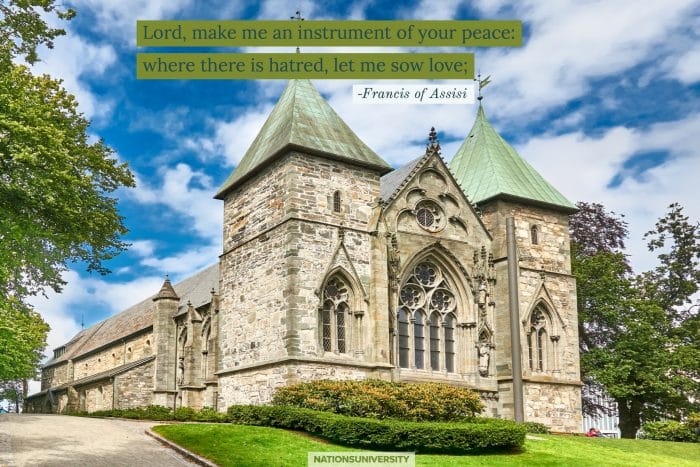 On a Week in Europe: I am writing from an airplane somewhere over the Atlantic Ocean, heading home after eight days in England and Norway.  The week has been abundant in its spiritual content.  Here are some of my observations.

It had been several decades since I visited Norway. Everywhere I went, both there and in England, it was evident that the world has become smaller.  Identified by their distinctive clothing, immigrants from the Middle East were seen on sidewalks and going about their daily lives almost everywhere.  There has clearly been a mass migration.  Even in the small town of Stavanger on the western coast of Norway, immigrants are driving taxis, working in hotels and restaurants, and have generally become part of the community.

Not only has Norway become secularized over the past century but the Lutheran faith it once held is now being further diluted by this influx of followers of other religions.  The same was observed on the sidewalks of the suburban village of Pinner outside of London.  I lived there back in the early 1980s.  At that time, there was no evidence of the immigrants as we see now.  The diversity of human “tribes” is shrinking geographically and with it the heritage of faith that may have once defined an entire country.

The impressive Stavanger Cathedral (Domkirke)  was founded in 1125 and is the oldest significant church in the country.  It now serves as a museum and even hosted a world-class Bach organ concert on this past Sunday evening.  While the Domkirke does hold one religious service a week (11:00 on Sunday) one must pay 100 NOK at other times to enter it.  Outside of Stavanger, I visited the Utstein Kloster monastery.  It is the oldest surviving medieval monastery in the country.

Today it serves as an empty historical novelty.  Large numbers of school children come to learn its history as an Augustinian community. The name, Utstein, means Outer Rock and is so designated because it is the furthest point of land before the North Sea.  One cannot but sense the solitude that attracted the monks who lived their lives there.  But no more.

On a very personal note, this was a “daddy-daughter” trip as my 40-year-old daughter accompanied me.  She was born in Stavanger, and I wanted her to see the house and town she first lived in.  It was a wonderful week of getting to know one another on an even more intimate level.  Little did I know she would present me with a very special novel, “Chasing Francis,” which tells the story of the pastor of a large American church who went to Italy to find a more spiritual Christianity than the “organization” he led back in New England.  Francis of Assisi (1181-1226) was a special man for a special time.

The known world (and church) of his time had fallen into materialism and sin.  Francis was called to help right that through the teaching of peace with a priority given to simplicity, poverty, and just good old caring for the poor and needy.  I saw much of myself in this book and cried my way through its pages.  Perhaps the way of Francis is what we need to counter the erosion of faith that is evident in our contemporary western developed world.  What do you think?  The Peace Prayer of St. Francis is shared below.

O divine Master, grant that I may not so much seek
to be consoled as to console,
to be understood as to understand,
to be loved as to love.
For it is in giving that we receive,
it is in pardoning that we are pardoned,
and it is in dying that we are born to eternal life.
Amen.

Read more reflections, Life is not a Cowboy Movie