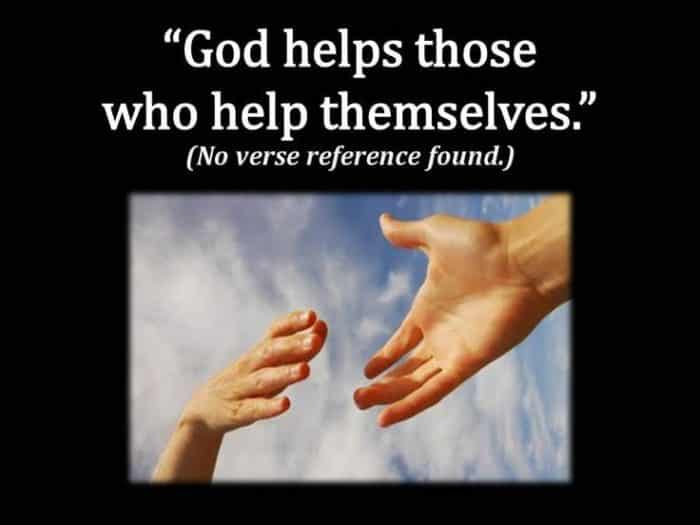 Do you know any unbiblical statements Christians believe came from the Bible? There are many proverbial sayings that are popular in our culture, and all too often, folks believe they came from the Bible. So let us imitate the Bereans from the book of Acts 17:10-12.

“10 That very night the believers sent Paul and Silas to Berea. When they arrived there, they went to the Jewish synagogue. 11 And the people of Berea were more open-minded than those in Thessalonica, and they listened eagerly to Paul’s message. They searched the Scriptures day after day to see if Paul and Silas were teaching the truth. 12 As a result, many Jews believed, as did many of the prominent Greek women and men.”

Every Bible-believing Christian should immerse themselves in scripture. Daily Bible reading is a must, how else are you going to be able to discern what folks say is biblically correct or not? Daily Bible reading is like exercise, it can be challenging to start, but once you get going, you develop an appetite that must be nourished. This appetite will help you in so many areas of your life.

Now mind you, I am talking about reading the Bible, not studying the Bible. Those are entirely two different things. To help me with this, I use a yearly Bible reading plan. Every year now, I leisurely stroll through the Bible and just listen. I am not searching, I lay aside prejudices, and instead, I am waiting to see what pops out at me, what is God trying to tell me? You will be astonished at what happens when you do this.

Now let us look at the first unbiblical statement I wish to discuss. We will look at others in the following weeks.

1. God helps those who help themselves.

What is wrong with that statement, can you tell? First, it implies relying on the flesh. In Proverb 28:26 says, Those who trust their own insight are foolish, but anyone who walks in wisdom is safe. And the prophet Jeremiah tells us in Jeremiah 17:5, This is what the Lord says: Cursed are those who put their trust in mere humans, who rely on human strength and turn their hearts away from the Lord.

The origin of that statement is uncertain. It reminds me of an old Roman proverb often attributed to Virgil, Fortuna Audaces Iuvat, or Fortune favors the bold*. Fortuna was the Roman goddess of luck or chance. We are invoking her when we say “good luck” to one another. This invocation is not quite the same, and the origin may go as far back as Greece and Aesop’s Fables.

Secondly, it really is all about you. The saying became popular in American culture when Ben Franklin used this phrase in Poor Richard’s Almanack. Americans like this saying, our post-modern materialist culture is firmly steeped with the idea that we are responsible for our achievements in life, and if we are unsuccessful — i.e., healthy, wealthy, and wise — then it’s our fault because we’ve been lazy: “Lazy hands make a man poor, but diligent hands bring wealth.” Proverbs 10:4.

The bottom line is this, you have to deny yourself, and this statement is anti-Gospel. It imbues self-reliance. Jesus tells us, “If anyone would come after me, let him deny himself and take up his cross and follow me.” Matthew 16:24. God has His plans for you and self-reliance puts self before God.

Unbiblical Statements Christians Believe – Cleanliness is Next to Godliness – Part 4