When You Die, Heaven Gains Another Angel 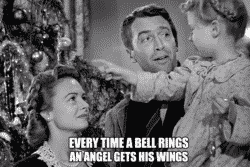 Plain and simple, humans are humans, and angels are angels. I hate to burst bubbles on this one and especially at Christmas time. Don’t we all get a little teary-eyed when Clarence gets his wings? The fact is humans are created in the image of God and do not become angels when they die. So what do they become? Let’s see what the Bible says.

First of all, humans are made in the image of God. In all of creation, this only applies to humans. This application is first mentioned in the book of Genesis, and later in the book of Hebrews, this is reinforced.

Then God said, “Let us make human beings in our image, to be like us. They will reign over the fish in the sea, the birds in the sky, the livestock, all the wild animals on the earth, and the small animals that scurry along the ground.” So God created human beingsin his own image. In the image of God, he created them; male and female he created them. (Genesis 1:26-27)

Humans Can Be Forgiven

Though all humans and some angels sinned, there is forgiveness only for humans.

We also know that the Son did not come to help angels; he came to help the descendants of Abraham. (Hebrews 2:16)

The angels who sinned are awaiting the day of judgment.

Then He will also say to those on the left, ‘Depart from Me, you cursed, into the everlasting fire prepared for the Devil and his angels(Matthew 25:41).

We have the opportunity to conform to the image of Christ. Hebrews chapter 2 has much to say about this.

What we do see is Jesus, who was given a position “a little lower than the angels”; and because he suffered death for us, he is now “crowned with glory and honor.” Yes, by God’s grace, Jesus tasted death for everyone. (Hebrews 2:9)

Humans Will Be Exalted

He made Him who knew no sin to be sin on our behalf, that we might become the righteousness of God in Him (2 Corinthians 5:21).

There will come a day when humans will judge the angels. Specifically, those who have believed in Jesus will eventually judge angels. Humans will share in Jesus’ exalted position because believers are a new creation in Christ. Consequently, we share His exalted position. The final state of redeemed humans is far above angels – believers will be conformed to the image of Christ.

Do you not know that we are to judge angels—to say nothing of ordinary matters? (1 Corinthians 6:3).

and raised us up with Him and seated us with Him in the heavenly places in Christ Jesus (Ephesians 2:6).

So, indeed, humans do not become angels. You should take great heart over this matter. Our loved ones who are in Christ and have gone on before us are made greater than the angels! What a glorious future for those in Christ to look forward to. So don’t cry for Clarence, rejoice that he was mistaken about there being more tests in heaven before you become an angel. Rejoice that a savior came, died for you, that you believed in him and you will be raised up in glory with him—above the angels.

Unbiblical Statements Christians Believe – Cleanliness is Next to Godliness – Part 4